Situated halfway between Cusco and Machu Picchu, the Sacred Valley is the perfect place to take a rest and enjoy night skies lit by a million bright stars. From the circular terraces of Moray to the fortress of Ollantaytambo, the Sacred Valley is a special place and your first encounter is likely to be as thrilling as it is unforgettable.

Maybe it’s the uplifting presence of majestic peaks; or the chance to kayak, to ride on horseback and to discover ancient ruins and the oldest cultural traditions of the Andes - but the Sacred Valley is what true adventures are made of. 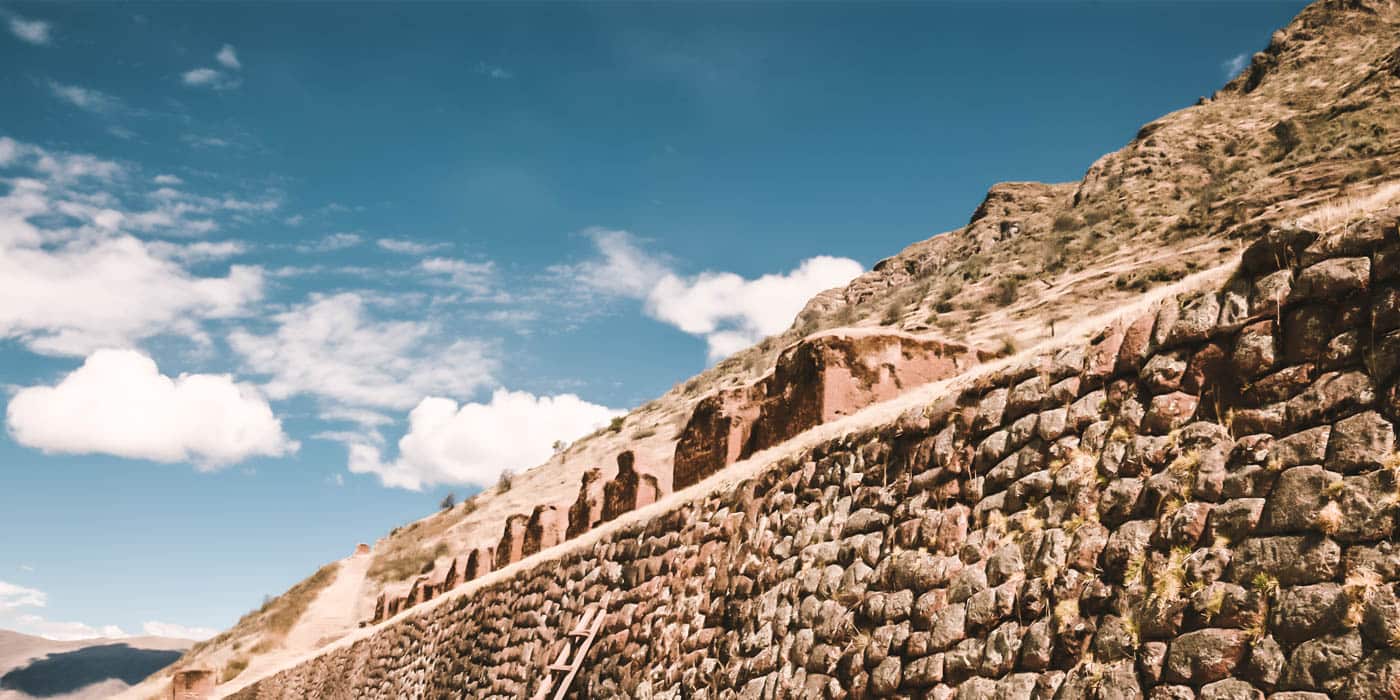 Between 500 to 1100 AD, the Wari culture (based in modern-day Ayacucho) expanded its reach to the Sacred Valley. They built and inhabited the complex of Piquillacta (about 45 minutes southeast of Cusco) and likely used it as a fortress to gain control of new lands. The first shallow salt pans at Maras were also constructed by the Wari culture.

The Inca Empire rose to power during the 14th century, expanded across ancient Peru and into Ecuador, Bolivia, Chile, Argentina, and Colombia. An extensive system of roads all led back to the Inca capital city of Cusco where the king resided.

The surrounding fertile fields of the Sacred Valley served as the civilization’s breadbasket and yielded varieties of fresh grains, fruits, and vegetables. Skilled Inca stonemasons also constructed royal palaces, religious temples and outposts in the Valley, which today you can visit at archaeological sites in Pisac, Ollantaytambo, and Chinchero.

When Francisco Pizarro’s forces took Cusco during the 1530s, the Inca soldiers retreated first to Ollantaytambo and then to the jungle beyond the Sacred Valley. The last Inca king Tupac Amaru I was captured in Vilcabamba and taken to Cusco where he was beheaded in the city’s main plaza.

During the colonial period, Cusco and the Sacred Valley were the frontline for the religious evangelization and acculturation of indigenous populations. In the Sacred Valley, scattered farmers were forced to move to small villages and many churches were erected. The thick adobe walls of the Chinchero church were built in the 17th century upon the foundations of an existing Inca temple.

The Sacred Valley has clung to the oldest traditions of the Andes while also embracing modernity and its change. Today, the small towns of the Sacred Valley attract Peruvians and international expats in search of a quieter pace of life. Tourism in the Sacred Valley is on the rise, but local movements and community-based tourism projects are at work to help preserve ancient Quechua traditions. 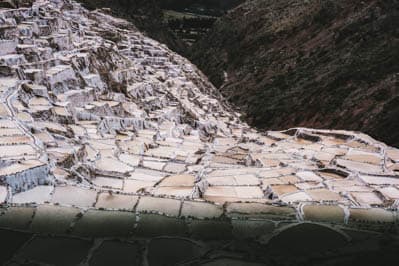 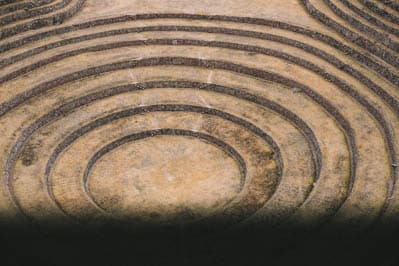 MORAY TERRACES
A series of circular terraces dug into the earth like a huge amphitheater and believed to have served as an elaborate agricultural laboratory for the Incas. 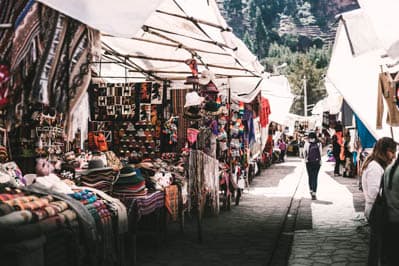 PISAC MARKET
Handmade textiles, crafts, and jewelry, as well as fresh fruits and vegetables are on sale at the famous market in Pisac. 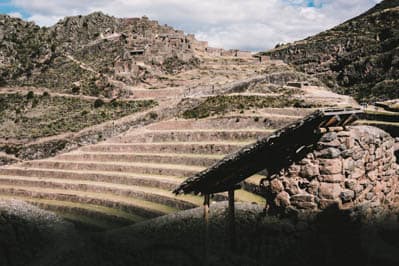 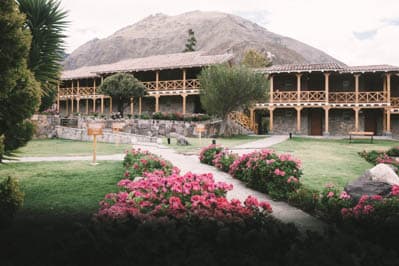 URUBAMBA
The bustling center of the Sacred Valley, home to luxurious hotels and a budding culinary scene. 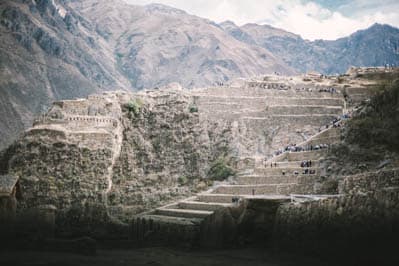 OLLANTAYTAMBO
A small town with big attractions including an example of Inca urban planning and a well-preserved archaeological site. 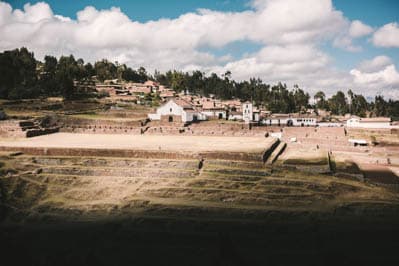 CHINCHERO
Center of Andean weaving, with a popular Sunday market frequented by locals as well as Inca ruins. 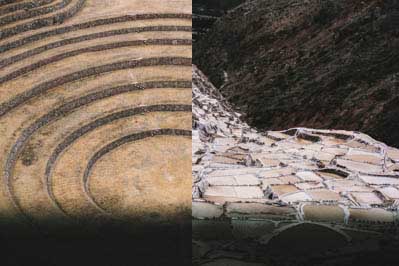 MARAS & MORAY TOUR
Explore two remarkable sites not usually seen by most travelers, the surreal salt pans at Maras and the concentric terraces at Moray. 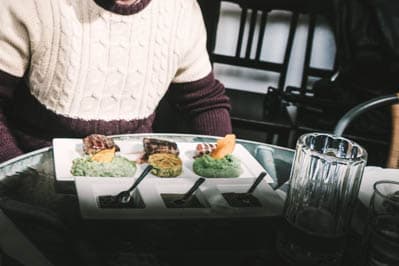 FINE DINING
Delight your senses at one of the Sacred Valley’s fine restaurants where the focus is on farm-to-table Andean-inspired cuisine. See “Restaurants” in this guide for our top picks. 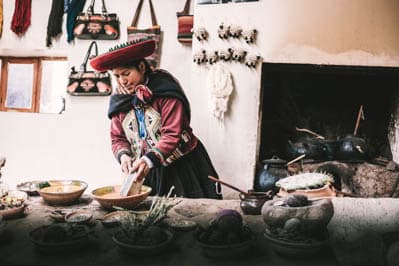 VISIT ARTISANS
Sign up for a cultural workshop led by local artisans who will teach you the art of Peruvian cooking, wood carving, basket weaving, pottery, and more. 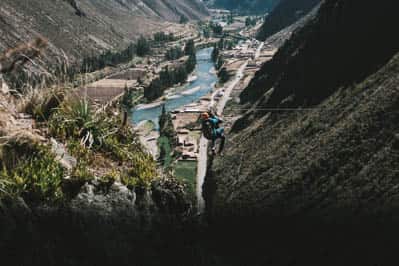 ZIPLINE & MOUNTAIN CLIMBING
Climb up a steep rock face using a series of steel ladders and then swoop down on a zip line for a thrilling experience. 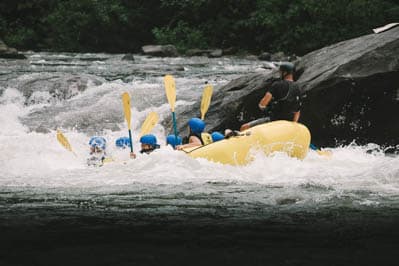 RIVER RAFTING
Book a rafting trip on the Urubamba River and enjoy rapids ranging from introductory to class II and class III plus. 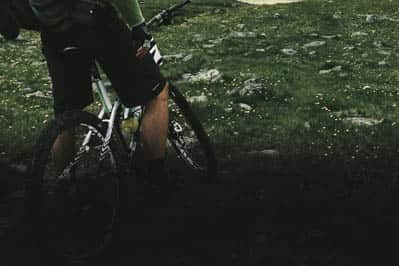 MOUNTAIN BIKING
Blaze along trails through the countryside passing tiny villages and stopping at Inca sites along the way. 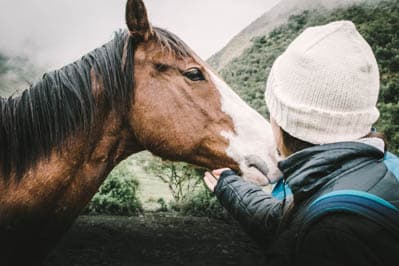 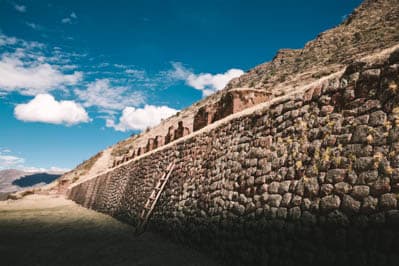 HUCHUY QOSQO
Walk along a trail to the Huchuy Qosqo ruins that sit atop a hill overlooking the Sacred Valley. MOTOR TOURS
Hop on an ATV/quad or motorcycle and tour the Sacred Valley’s sites via backroads. 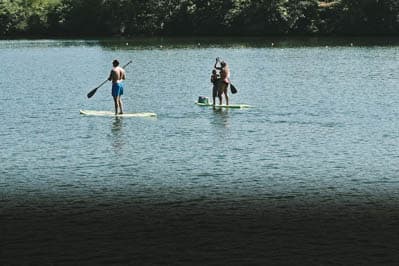 STAND UP PADDLE BOARDING
Drive to placid Lake Piuray near the town of Chinchero and enjoy a day of tranquil paddling on the high altitude waters. 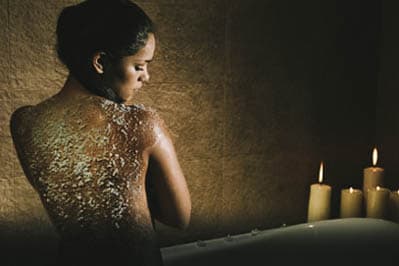 Cuchara de Palo Restaurant
The menu has traditional Peruvian cuisine and novo-Andean dishes, including some vegetarian options, and are made with locally grown produce.
Pisac main plaza
Related Packages 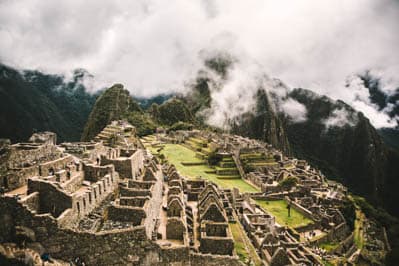 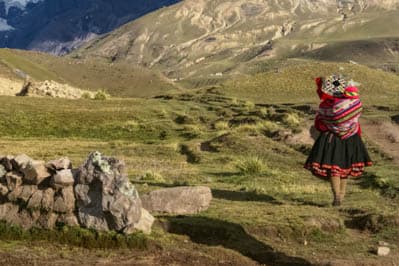 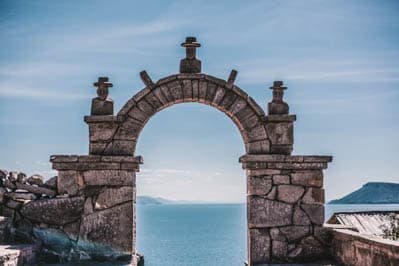 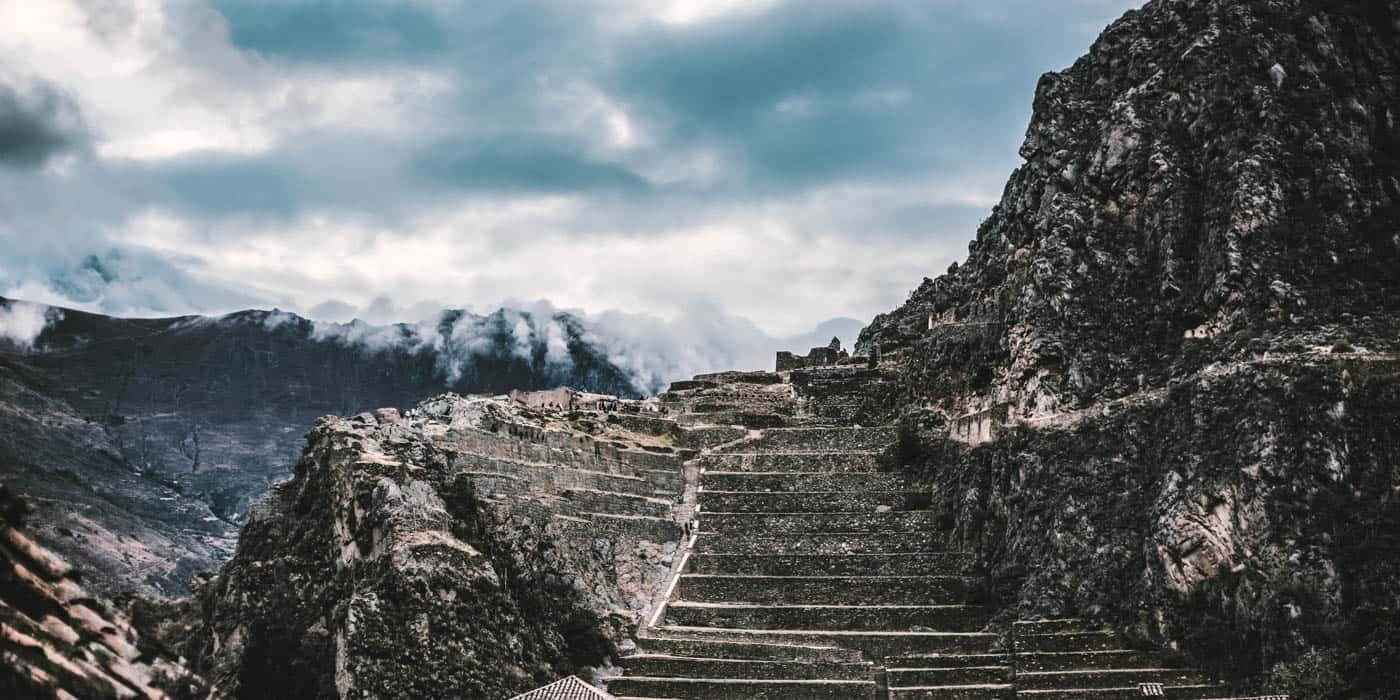 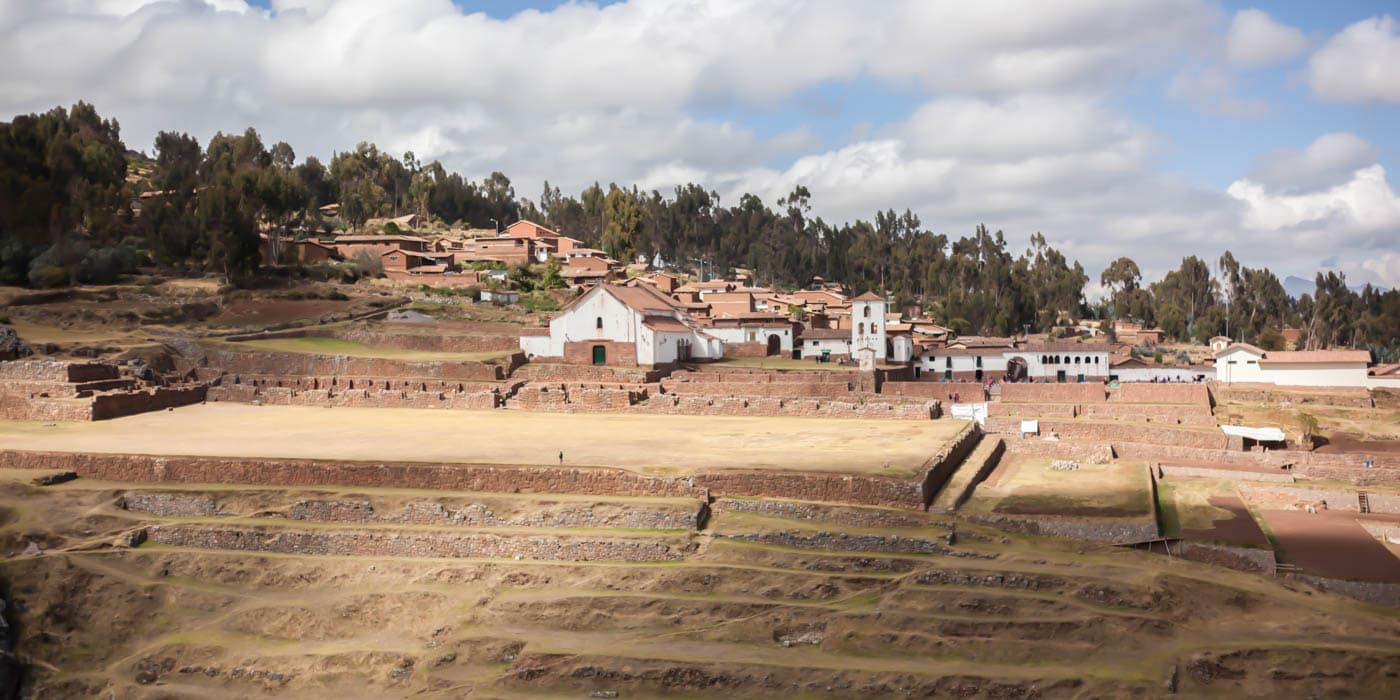 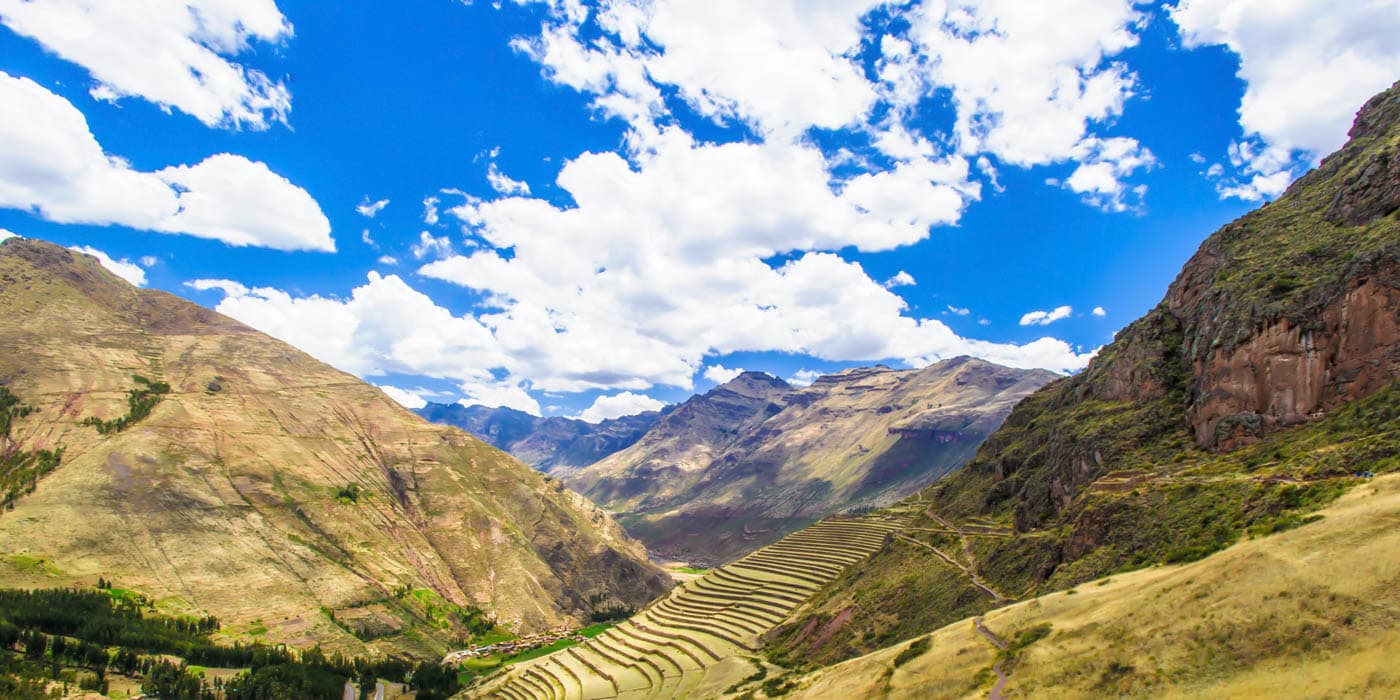 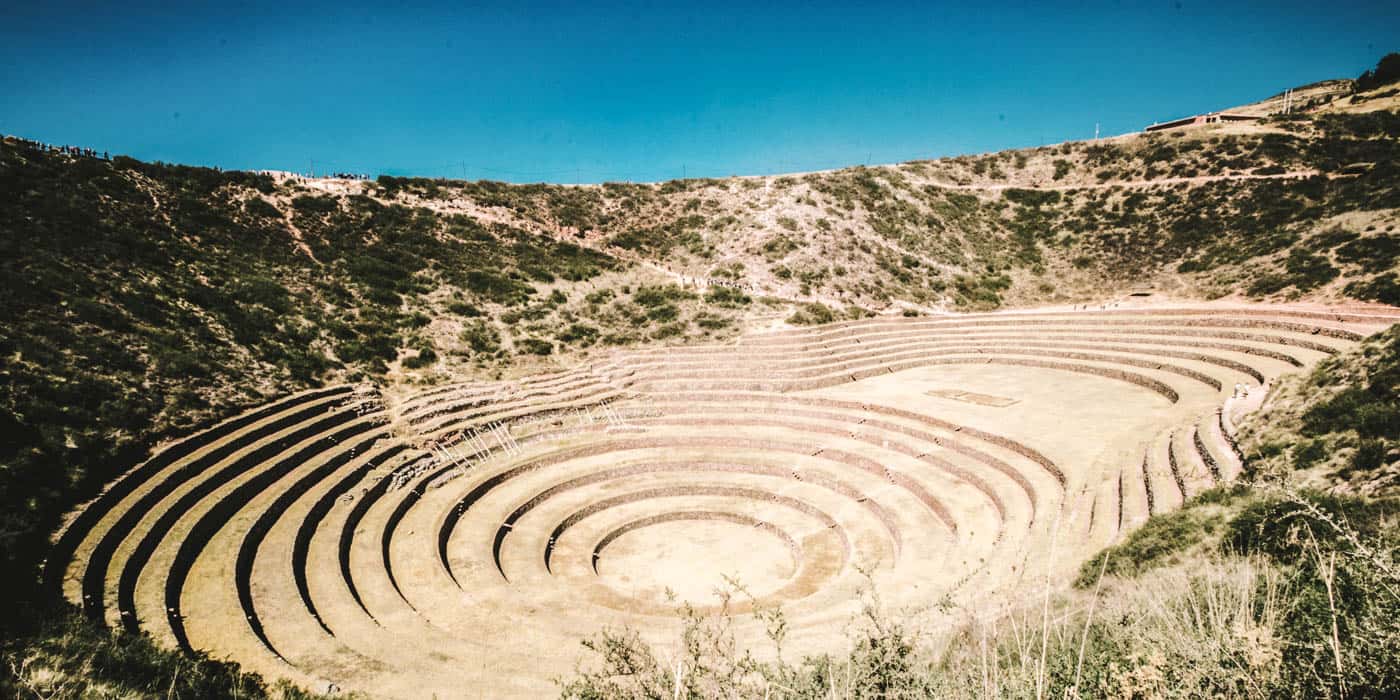 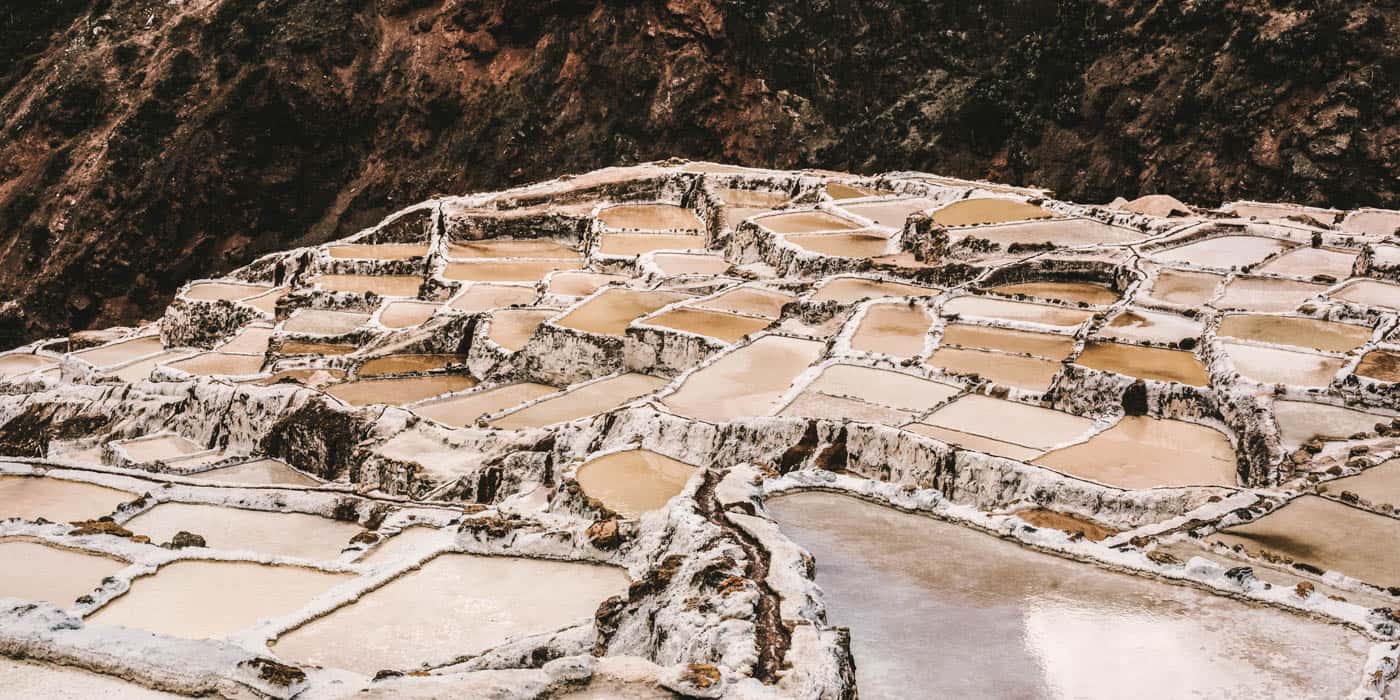 Altitude sickness is a common concern for travelers planning a trip to the Sacred Valley region. Most visitors only experience minor symptoms (shortness of breath, headache, nausea) as a result of the elevation. Take it easy the first couple days while you acclimatize and don’t overexert yourself. Towns in the Sacred Valley are actually lower in elevation than Cusco, so some travelers plan to spend their first few nights in the Valley to reduce the onset of altitude sickness symptoms.

Don’t drink the tap water in the Sacred Valley, or anywhere in Peru for that matter. Buy bottled water to drink and use when brushing your teeth. On a multiday hike, your trekking team will supply purified water that’s safe to drink.

The Sacred Valley is tourist friendly and most travelers will enjoy an incident-free trip. Avoid opportunist pickpockets by keeping a close eye on your personal belongings in crowded areas. Carry your valuables in a traveler’s wallet around your neck or waist under your clothing. When possible, leave jewelry, excess cash and your passport (carry around a paper copy instead) in the safety box at your hotel.

How to get around the Sacred Valley

The majority of tours to the Sacred Valley include transport to/from your hotel. For independent exploration, you can take a local bus (the most economic way) or hire a taxi (more convenient and time efficient). Many travelers use the railway station at Ollantaytambo to get to Machu Picchu or Cusco (Poroy Station).

You will need Peruvian currency (Soles) to pay for taxi rides, small purchases, and tips for guides and porters. It’s a good idea to carry around small bills and coins in the Sacred Valley because market vendors and small stores may not have adequate change to break larger notes.

Alert your bank about your Peru travel plans before you leave and inquire what foreign transaction fees (if any) apply to your bankcard. You can get better exchange rates in Cusco than in small Sacred Valley towns. There are ATMs in Pisac, Urubamba, and Ollantaytambo that dispense both US dollars and local currency.

The weather in the Sacred Valley changes quickly, so bring a lot of layers to be prepared. Pack t-shirts and add warmth with long-sleeve clothing and a fleece jacket. Lightweight pants and comfortable hiking boots with good traction are ideal for walking up to and around the Inca archaeological complexes. Don’t forget your hat, glasses, and sunblock for sun protection. For daily excursions, bring a daypack with snug straps to carry your water, camera, and other personal belongings.

During the rainy season months, pack a waterproof jacket or a travel-size umbrella. Plastic ponchos are also available to buy in Cusco and the Sacred Valley.

If you’re taking the train to Machu Picchu or doing a multi-day trek, then you’ll likely need to store your large bags with any items you won’t need for that leg of the trip. Each train passenger is permitted one bag or backpack weighing up to 11 lbs (5 kg). Fortunately, many Sacred Valley hotels provide free luggage storage for their guests.

Traveling to the Cusco and Sacred Valley region in the high season (June, July, August) requires months of advanced planning because services fill up quickly. Trip logistics include airfare, hotel reservations, tours, and train tickets and entrance tickets if you go to Machu Picchu. Limited permits for hiking the Inca Trail to Machu Picchu can book up sometimes 4 months in advance. Note that the Inca Trail is closed each February for maintenance.

The Sacred Valley is a year round destination. The dry season from April to October is a better time to travel if you’re planning to trek or pursue adventure sports. The rainy season from November to March is ideal for fewer crowds, though you should be prepared with proper gear (quick-drying pants of synthetic material, water-resistant jacket and shoes) to enjoy your stay.

The key to being comfortable in the Sacred Valley is to dress in layers. Days are sunny and warm, nights are very cold. Rain gear is essential for the wet season. For example, jeans are ok, but take a long time to dry. Quick-drying synthetic material works better under these conditions.